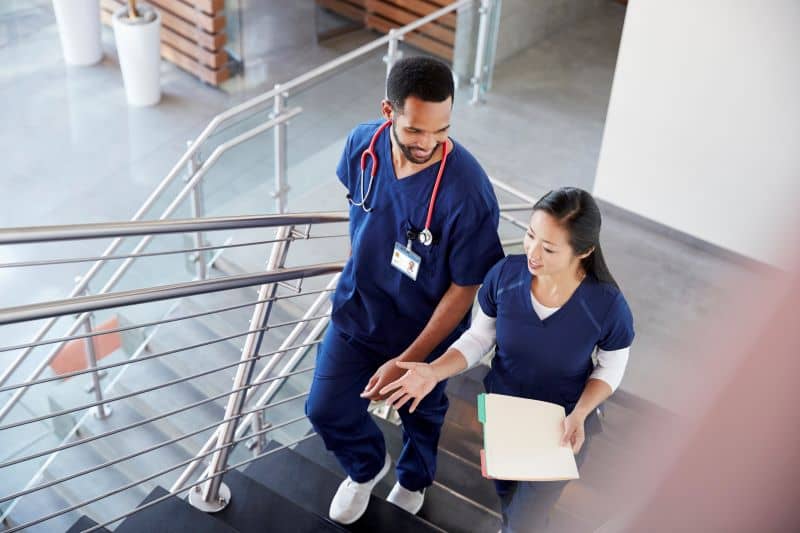 According to the U.S.Census Bureau, there were 2.2 million female RNs in 2018, compared to 330,320 male nurses. Although most nursing positions are filled by women, their earnings are less than a typical male nurse salary in almost every specialty and setting. For each dollar a male registered nurse earns, a full-time female RN earns only 93 cents.

Nurses comprise the biggest segment of the healthcare workforce. As nursing jobs continue to outpace other occupations, this difference in salary is a concern for millions of women.

A Closer Look at The Pay Gap

According to Medscape's 2019 RN/LPN Compensation Report, the average male nurse salary is $83,000 per year, 4 percent more than female RNs earning an average of $80,000 per year.

About 70 percent of male nurses are paid hourly. Medscape's study pegs a male RN's average hourly wage at $39 compared to $38 per hour for female nurses. While the gap isn't significant, over the course of a year, male RNs who earn an hourly rate make an average of $82,000, which is compared to $78,000 for full-time female nurses. The difference likely comes from supplementing their hourly rate with overtime and shift differential.

Research from Montana State University shows that an average male nurse is two years younger than a female RN. Despite having more experience, however, female nurses still earn a lower hourly rate.

The discrepancy between female and male nurse salaries extends throughout all specialties and positions except orthopedics, according to the Journal of the American Medical Association. A 2015 study that reviewed RN salaries from 1998 to 2008 found a range of salary gaps between male and female nurses:

The study found there was no improvement in this inequity over the ten-year period.

Why Do Male Nurses Make More?

They're More Likely To Work in Hospital Settings

They Take on Extra Shifts

A male nurse's salary may be higher due to the type of shifts men take on. According to Medscape's compensation report, male nurses are more likely to work:

While 53% of male nurses choose employment in urban settings, only 44% of female nurses do. Nurses in cities typically earn a higher salary.

According to the Journal of Rural Health, registered nurses who work in rural areas tend to have less nursing education and are more likely employed in public and community health instead of higher-paying hospitals. The study found that the more rural an area a nurse lives in, the more likely they commute and receive lower salaries.

Less than 1% of female nurses work as Certified Registered Nurse Anesthetists (CRNA), compared to 10% of male RNs. According to the Census Bureau, men occupy 41% of nurse anesthetist jobs even though they make up about 12% of the total nurse workforce.

CRNAs are one of the highest-paying nursing occupations. The average salary of $150,833 is more than double the average of all nursing jobs. Male nurse anesthetists make about $162,900 per year.

Male RNs also choose nursing jobs in emergency, surgical and critical care units, which can pay better. For example, the median salary for a registered nurse, according to PayScale, is $29.36 and it reaches as high as $41.01. Emergency room nurses, by comparison, earn a median salary of $32.56 per hour and up to $45.29 per hour.

As the demand for skilled nurses grows, it's important for men to enter the field to ensure diversity and help fill needs. The challenge for the healthcare system is to achieve pay equity.

Explore our open travel nurse jobs to see the salary range for your specialty.